As noted elsewhere in this web site, MicroCare is proud to be one of the first companies in the industry to commercialize cleaning products using 1,2-trans-dichloroethylene which is also known by the CAS #156-60-5 but more commonly called “trans”.

We often get inquiries about trans, mainly because it is such a new ingredient in many solvents. But once in a while we get inquiries which question the “dangers” of trans. Since there is some bad information in the market place about trans. Let’s take a moment to review the details. Most often, the question revolves around the two most common safety issues: flammability and/or toxicity.

Many customers worry about the flammability of trans. We use standardized tests to measure flammability and can confirm that trans is highly flammable, similar to alcohol. But trans is rarely used alone. For example, it is a major ingredient in our Heavy Duty Flux Remover – SuprClean™ (#MCC-SPR), one of MicroCare’s most popular cleaners. Despite containing about 40% trans, SuprClean™ is completely nonflammable. How does that happen?

The solvent is nonflammable because MicroCare uses an HFC dilutant AND an HFC propellant which are nonflammable. These ingredients suppress the flammability of other ingredients. This suppression factor works very well. In fact, at MicroCare we can recall a competitor had a salesman actually try to show their products were safer than MicroCare’s solvents. So he sprayed a competing solvent and a MicroCare solvent into two glasses and dropped a match into them. The MicroCare solvent put the match out while the competing product started to burn. Naturally, this was pretty embarrassing for that salesman. But the point is, our packaging and blending helps make these products safer. (NOTE: This is NOT the recommended way to test for flammability!)

It’s useful to note that that the industry is moving to a newer, more comprehensive method of testing flammability; we’ll publish those details when they become available. In general, using nonflammable solvents like SuprClean™ will be a big boost for safety when compared, for example, to using IPA in a dip-and-brush mode.

MicroCare tries to be pro-active and solve toxicity issues before they become problems. And trans clearly is one of the answers, not one of the problems.

There are several “versions” of trans and one of them is more toxic than the other. Trans is a molecule consisting of two carbon atoms, two chlorine atoms and two hydrogen atoms. The carbon atoms are always in the center with a strong double-bond between them. But the chlorine and the hydrogen can be arranged several different ways. If they are arranged in the “trans” form, or trans “isomer” as the chemists call it, there is one chlorine and one hydrogen atom attached to each carbon atom. This is very symmetrical, stable and safe. ACGIH has assigned the trans isomer a threshold limit value (TLV) of 200 ppm, which is a very good “safety score” in today’s world.

But if both chlorines are locked on to one carbon and both hydrogen atoms are over on the other side of the molecule, the molecule is not symmetrical. This is the “cis” formation. In the pure form the “cis” isomer has a toxicity level of 10 ppm, which is a low score (highly toxic). A solvent made of purely the “cis” isomer would be a very nasty product indeed.

Now, when people make trans, a small portion of “cis” also is made in the same reaction. In the old days, people just shrugged their shoulders and said “well, that’s how it comes out.” But in today’s world we do better. Our factory actually filters out the “cis” isomer using temperature and other processes, and throws the “cis” back into the tank for further processing. So the “trans” found in MicroCare solvents is a very, very pure “trans” isomer.

Is there some “cis” in the solvent? Probably. But those levels are so low that they are not a health and safety factor in the slightest.  The trans in MicroCare products is clean, pure and very safe when used as suggested by MicroCare.

Which brings us back to the TriggerGrip™ dispensing system. This has been and remains one of our most important innovations. It completely eliminates the messy, wasteful and dangerous over-spray from “high pressure” aerosols. It also delivers better and cheaper cleaning than the classic “dip-and-brush” system. In short, there is no better, safer or cheaper way to clean a PCB than with a powerful safe solvent, like SuprClean™, and the Trigger Grip dispenser.

The calculated overall threshhold limit value for SuprClean™ is about 200 ppm. This means you can inhale 200 ppm of SuprClean™ for 8 hours a day, for a 30-year career, and have no noticeable ill-effects. (In fact, the 8-hour Time- Weighted Average is actually 1/10th of the “no observed effects level” — which means it really is about 4,000 ppm — as still a further buffer for safety.) See the SDS sheet for each product for more details.

If you still have questions or concerns, contact MicroCare for more details. 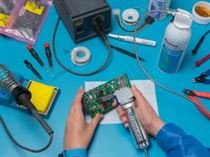 The TriggerGrip™ cleaning system connects to a MicroCare aerosol can and delivers fast, better and safer benchtop cleaning