First, a word of explanation. Global Warming Potential (G.W.P.) is an attempt to predict the effect a stable, long-lived molecule might have in warming the atmosphere of the planet. It is thought that the gradual warming of the atmosphere could have catastrophic environmental effects, increasing the deserts of the world, devastating crop lands, and causing wide-spread extinctions of many species. Perfluorocarbons (PFCs) and sulfur hexafluoride (SF6) are the main High Global Warming Potential gases. Many of these gases are 1000, 10,000 even 20,000 times more powerful than the baseline carbon dioxide (CO2). They also have very long atmospheric lives and many can stay in our atmosphere for thousands of years.

Many, many common chemicals have GWP ratings. The GWP of the HFC solvents are about 1,000, depending upon the exact formulation. The big contributors here are refrigerants used in air conditioning and refrigeration, exceeding the contributions of cleaning solvents by thousands of times.

Another environmental concern is low-altitude smog. Smog is generally caused by Volatile Organic Compounds which react with sunlight. This is where things get sticky.

In general, chemicals that have high GWP ratings have low VOC ratings. High VOC ratings generally mean a chemical has a low GWP. It’s like a child’s teeter-totter: one when side goes up, the other side must go down. It is almost impossible for a chemical to be both a low VOC and a low GWP, and the few cleaners that do manage this trick usually are flammable.

First, if you can, select an HFO or nPB based cleaning fluid because these solvents get very good scores on the global warming scale. The HFOs have GWP of less than 10 and usually 1, which is about as good as you can get. NPB usually is rated with GWP scores of zero, due to the very short atmospheric lifetime of the material.

In short, MicroCare has a whole family of highly effective, planet-friendly replacements for high GWP solvents such as CFC-113, 1,1,1-trichloroethane, HCFC-141b and HCFC-225, as well as high-global-warming solvents such as perfluorocarbons (PFCs). 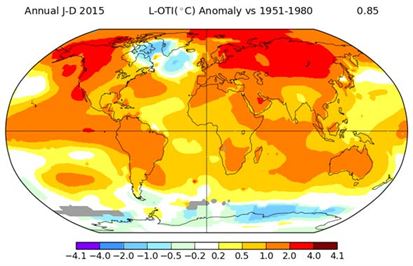 A computer-generated map of temperature anomalies around the globe in 2015. Source: GISS