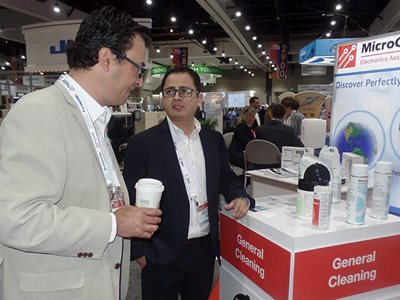 As the APEX Expo 2018 in San Diego wound to a close, there was only one obvious conclusion the attendees could make: MicroCare dominated the critical cleaning segment. The MicroCare stand was large and bright, and by far the most completely equipped venue at the show. Customers could find new cleaning answers that ranged from tiny flux cleaning pens to a economy-sized aerosol sprays to giant vapor degreaser, all at one spot. The MicroCare team was large, well-informed and thoroughly engaged, making their presence felt across the venue. 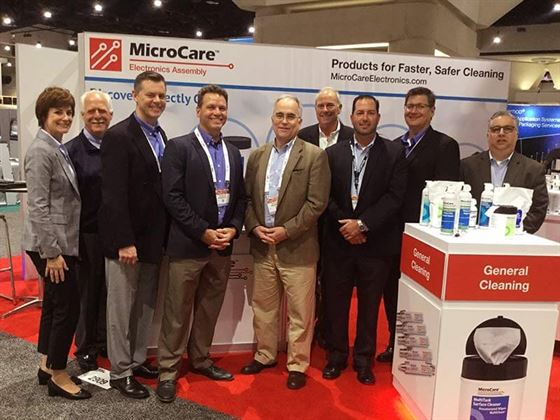 In a week filled with notable events, a couple of moments truly stand out. First, HISCO Inc. of Houston, TX was honored as the MicroCare Distributor of the Year for 2017. This is the second year in the row they have been so honored. The criteria in 2017 evolved slightly, but despite the changes HISCO came out with the best “report card” on the criteria of superior rate of growth (proportionately and in absolute terms), the professionalism of their operations (Marketing, Purchasing, Web Site, etc.), the excellent support MicroCare gets from HISCO management and the HISCO sales team, the company’s overall enthusiasm for the line and their willingness to engage with strong collaborative efforts with MicroCare. All in all, it was a terrific year. 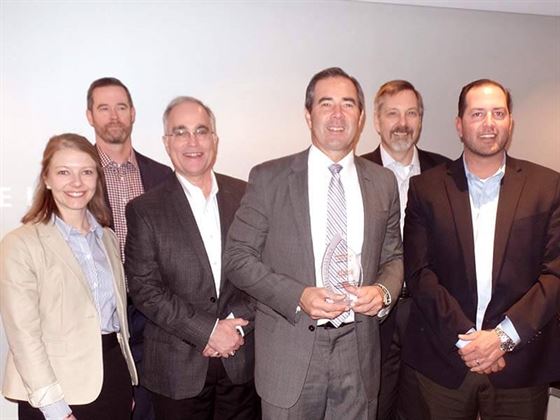 The HISCO team accepts the Distributor of the Year award from Tom Tattersall, MicroCare chief executive

Another award was made by MicroCare to honor the regional independent sales representatives MicroCare uses across Mexico, the USA and Canada. For 2017, the Rep of the Year award was won by Mr. Stan Adsit, of Adsit & Associates, for his excellent sales, product support and technical performance across all the product lines and geographies. Thank you, Stan! 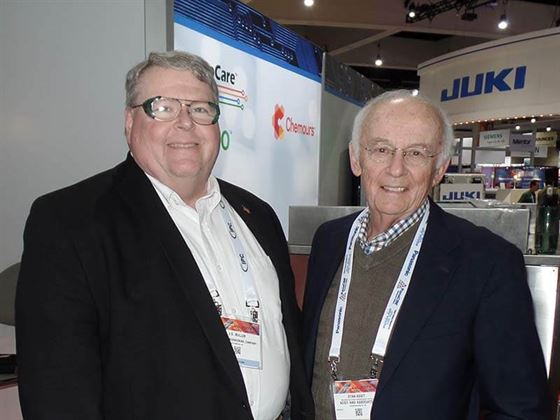 J.D Buller of Chicago (left) and Stan Adsit from Indiana spent time at the booth, meeting with clients. Mr. Adsit won “Sales Rep of the Year” from MicroCare at this year’s show; J.D. Buller was rep of the year in 2016.

At the show, MicroCare introduced 10 new products and 18 new SKU units to the electronics industry. We had a dozen meetings with publishers and editors, met hundreds of customers and prospects, and signed up new distributors in the USA and around the world. One of the big attractions to the stand was the giant operating vapor degreaser from Solvac (prev. Crest Ultrasonics)  that featured the new Tergo™ cleaning fluids. Vapor degreasing is a process used to clean large numbers of printed circuit boards very quickly without the problems and hassles of using water. People lined up around the corner to see it work and learn the benefits of modern, planet-friendly vapor degreasing fluids. 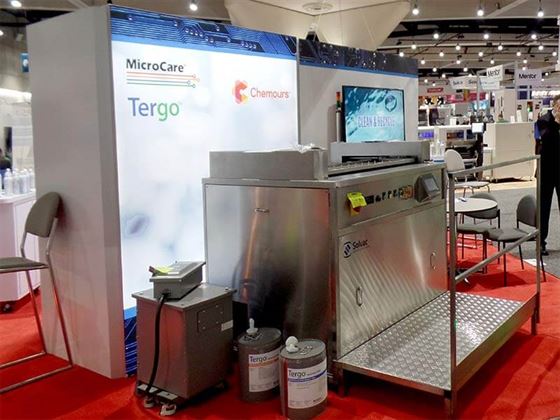 A large, fully-featured vapor degreaser was loaded with solvent and performing cleaning tests at the show.

Now the team is heading to the airport, wrapping up another exciting APEX. We look forward to continuing our discussions with all the new customers we just met at the show, and the growth that will come from another year of exciting innovation and customer care.