The short answer is, YES, the quality of the understencil wiping roll make a BIG difference. It is a challenge to produce today's demanding electronics on high speed, automatic production lines. Sometimes the smallest detail will derail the production process and devastate your productivity. One of the most common show-stoppers we have seen is improper stencil printing.

Stencil rolls made by MicroCare normally feature “first” quality hydroentangled paper. Other people may use quality fabric, or maybe not. Or they may buy rejected “seconds” from a vendor and claim it is just as good. Or maybe they just buy cheap paper from around the world (often, China) and let you find out for yourself what works and what doesn’t. Here’s a good rule: caveat emptor: buyer beware. If a price sounds too good to be true, it probably isn’t!

Stencil rolls from MicroCare can clean stencils dry, without IPA alcohol or other solvents. This means the “indexing” of the stencil roll can be reduced to the printer’s minimum, usually just a few millimeters. This can extend roll life 100-300%, depending upon the printer and the roll being replaced.

MicroCare rolls will contain fewer broken fibers, resulting in less visible contamination 100µ or larger on your stencils and boards. The binders (glues) used in other nonwoven papers tend to abrade out of and away from the fabric, yielding higher particle counts in the 0.5µ range or higher.

MicroCare SMT rolls do not contain any ionic contamination which could be released and re-deposited on the stencil and boards. Fabrics not manufactured by MicroCare often have higher extractables, almost always sodium chloride and other corrosive additives. These are released when solvents come in contact with the paper. When it comes to electronics and stencil printing, this is not good.

Binders (the glues in paper) often leave white residues. Sometimes these are misdiagnosed as problems with the solder paste or solvents. Isopropyl alcohol, the industry’s most popular solvent, is a common ingredient in solder paste. In addition, many stencil printing systems spray solvents onto the paper during the wiping process. Often these extractables can be up to 1% of the weight of the sheet — nearly two grams per standard 450mm/18-inch stencil roll.

Once the binders are dissolved by the solvent, the strength of the paper deteriorates. In contrast, laboratory tests prove that MicroCare stencil rolls are almost completely unaffected by electronics-grade solvents. Micro•Wipe™ FP stencil rolls exhibit a tensile strength of up to 400N/90 lbs., depending upon the fabric, and will retain 75% of this strength even when wet.

Since there are no nonvolatile binders, nor other chemicals, adhesives, or surface finishes added to the paper during the manufacturing process, the fabric is more consistent from lot to lot, and the wiping process will be more reliable.

Binders fill the gaps between the fibers in the fabric, clogging spaces that would otherwise absorb solvents, solder paste and epoxies. MicroCare papers lead the industry in purity, puffiness and softness.

Some papers use binders which are not miscible with the solvents in the solder paste. This will cause the solder paste to move away from the paper, rather that to be absorbed by it, and creates a Fisheye effect during the wiping process.

Lacking glues or binders, MicroCare fabrics and papers does not exhibit allergic or toxic responses when in contact with skin. In fact, the material is so clean it is used in hospital operating rooms. 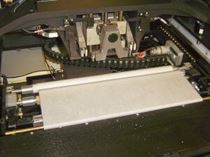 The understencil wiping roll, installed on an MPM UP2000 printer