Many younger engineers today have never seen a vapor degreaser and are unfamiliar with the operations or the benefits of the technology. Because of its simplicity, vapor degreasing has proven to be the most consistent and “head-ache” free cleaning process. The “secret sauce” of vapor degreasing  is the low-boiling solvent which makes the magic happen.

Let Thermodynamics Do the Cleaning

Most people are familiar with water cleaning. Water may be the elixir of life, but it’s not a great cleaning solvent because of the inherent limitations of the molecule. To overcome some of these natural limitations, aqueous cleaning processes tweak the systems in three dimensions: they extend the cleaning cycles, or extend the machines themselves with more pumps and sprays, or they add various soaps or saponifiers. All of this adds costs. 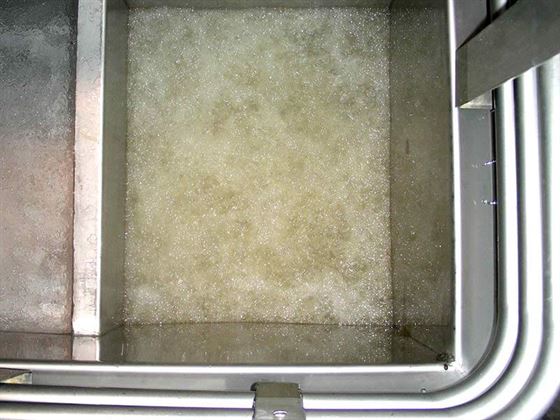 Eventually the vapors rise to the first set of refrigeration coils called the “primary condensing coils” (see photo). These coils chill the vapors and condense the cleaning fluid back into its liquid state. This condensed liquid drips into a trough that wraps around the internal circumference of the machine and is collected in the water separator (since some air-borne humidity from above the vapor blanket also condenses on these same coils) and eventually routed into the “rinse sump.” Since the rinse sump already is filled with clean cleaning fluid, the addition of more cleaning fluid causes the rinse sump to overflow, spilling the cleaning fluid into the same boil sump where it originally came from. This purging maintains a constantly clean rinse sump. It also concentrates any contamination into the boil sump, for easy removal and maintenance.

Because the cleaning fluids boil so easily, a number of important benefits become possible:

Here’s a general list of the boiling points of popular cleaning choices, sorted from lowest boiling temperature to highest:

One final note: the boiling point does not affect the cleaning power of the cleaning fluid; that is a function of the Kb value and the viscosity, surface tension, densities, and low latent heat of the specific solvent. However, a higher-boiling cleaning fluid may be a useful tool when trying to remove insoluble contamination such as wax or buffing compounds because the solvent can melt the contamination and carry it away.

In short, an appropriate boiling point is the enabling trait that makes vapor degreasing so very useful. When the cleaning fluids are used in a properly configured cleaning machine, the results are consistent, affordable, fast, reliable, safe and environmentally acceptable.

* Indicates a flammable cleaning fluid; this usually is an ingredient in an azeotropic blend.