'Hygroscopic' is a chemical term which describes a behavior of certain chemicals. Hygroscopic chemicals absorb water; they love water. They want to pick up water molecules out of the air. Normal isopropyl alcohol (IPA, or rubbing alcohol) is infinitely hygroscopic.

Why is that important? Because solvents which carry water as a contaminant generally are weaker and less effective cleaners than solvents without water. Since people use alcohol on the workbench for touch-up cleaning, storing the alcohol in open jars, the alcohol will absorb water from the air and self-contaminate, especially if loosely-sealed. Later, when a technician tries to use the solvent again, he will find it doesn't work as well as it did before it became contaminated. In effect, hygroscopic solvents are self-diluting when exposed to air.

MicroCare makes a product, our Alcohol-Enhanced Flux Remover - ProClean™ (#MCC-PRO) that is a popular, alcohol-based solvent. When packaged, it is water-free to four decimal places — the purest, driest, most water-free alcohol we can find. These are typically called 'anhydrous' (water-free) or 'analytical grade' which is the highest, purest grade of alcohol. This costs a little more, but makes for a much better cleaner. This is also another reason why we highly recommend the TriggerGrip dispensing system, because the solvent is never exposed to air until the moment it is used.

Specific details about each product and water content can be found on this web site, on the product specification sheets, and in every safety data sheet, all available in this site. 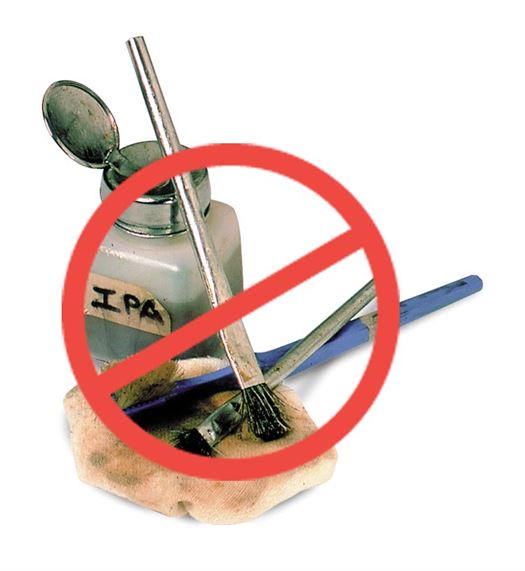