Genesolv 2004, Arklone 141b and other cleaners based on the hydrochlorofluorocarbon molecule HCFC-141b has been phased-out of production and is no longer available from MicroCare and other reputable firms.  On a label or MSDS sheet you might see brand names such as “Genesolv®” or “Forane.” The cleaner’s precise chemical name is dichlorofluoroethane and it usually will be further identified as “CAS #1717-00-6.”

MicroCare packaged four products using HCFC-141b: Genesolv® 2004, Genesolv® 2010, HyperClean™ and Precision Contact Cleaner II. There are no restrictions on using HCFC cleaners in the U.S. But, since nobody has produced the fluid since the end of 2002 (except in China) it has become very scarce and expensive.  MicroCare has many new, ozone-safe solvents that are perfect answers to replace HCFC- 141b solvents.

Was HCFC-141b a Big Problem for the Environment?

Under the terms of the Montreal Protocol, all of the production and importation of HCFC-141b ended in the U.S. on December 31, 2002. The general phase-out schedules were defined years ago. This effort was based on research by the British in the 1960s detected changes in the ozone layer in the Antarctic. It took almost another decade to figure out the cause, and it was Mario Molina, a lowly post-graduate researcher in California, who first realised that man-made chemicals such as CFCs were damaging the ozone layer. Fortunately his mentor, Dr. Sherwood Rowland, took his findings seriously and the pair went on to publish an article in 1974 in which they spelled out the dangers of continued use of CFCs.

In the 1980s, in response to the depletion of the ozone layer, more than 100 nations worked together on a treaty called “the Montreal Protocol.” This treaty set the rules for eliminating ozone-depleting substances around the globe.  The first chemicals to go were the refrigerants and solvents called CFCs, halogenated fire suppressants and other “Class I ozone-depleting substances.” Then the less damaging HCFCs, which are “Class II” products, had to go. The last HCFC on the market today was HCFC-225, made in Japan, and it was phased out in 2015.

The good news is that the ozone layer is rebuilding itself. Recent research (2015) suggests first clear evidence that the ozone layer above Antarctica is starting to heal. As of September 2015 the “ozone hole” was around 4 million square kilometers smaller than in the year 2000 — an area roughly the size of India. The gains have been credited to the long term phase-out of the ozone-destroying chemicals.

How Much HCFC-141b Was Produced?

Yes, it was. This cleaner had become more popular than anybody expected thirty years ago. Since then more than $50 million of this product was sold across the U.S. each year, about 10 million pounds just in the electronics industry. At it’s peak, about 200 million pounds of HCFC-141b was used around the world annually. The EPA was worried that as long as the electronics industry was “addicted” to convenient and inexpensive HCFC-141b, the ozone layer would never regenerate.

Does This Involve “SNAP”?

Yes, it does. The Clean Air Act defines the “Significant New Alternatives Program” (SNAP). This process prevents people from switching from one ozone-depleting chemical to something worse. Customers will need to switch to new SNAP-accepted alternatives to replace HCFC-141b. The first step they should take with any substitute is to confirm the proposed alternative is SNAP- approved as a replacement for HCFC-141b in their specific application. All of the MicroCare alternatives are “SNAP” approved.

So What Are the Alternatives?

If you are still using HCFC-141b, it’s time to RUN, not walk, to the alternative choices. You’ve put this off for years; the time has come.

There are a number of great alternatives to consider:

Samples are available from MicroCare. 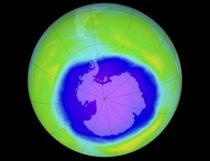 The “ozone hole” over Antarctica has shrunk by 4 million square kilometers from 2002-2015, mostly due to the reduction in ozone-depleting solvents. Source: BCC