Fluid mechanics is the study of how fluids move, and one of the most important parameters of fluids is their viscosity. Most people think of “viscosity” in terms of a fluid’s ability to flow. Chemists have a slightly different feel for the phenomenon; viscosity is defined as its resistance to gradual deformation. This corresponds to the informal concept of “thickness” — for example, honey is thicker and has a much higher viscosity than water.

According to Wikipedia, viscosity is the friction between the molecules of fluid. For example, when a fluid flows through a tube, the fluid will move more quickly near the center of the tube axis but move more slowly along the walls of the tube. This is because of the friction with the walls. Pressure or energy (“stress”) is needed to overcome the friction between the faster-moving fluid and the more slowly moving layers. Fluids with low viscosity have a low resistance and shear easily and the molecules flow quickly; high viscosity fluids move sluggishly and resist deformation. Some liquids, like pitch, glass and peanut butter, have such high viscosity they behave like solids.

In common vernacular, a liquid is said to be “viscous” if its viscosity is substantially greater than that of water, and is described as “mobile” if the viscosity is noticeably less than water.

Some common viscosities are listed in this chart:

Viscosity varies with temperature and pressure. It is usually expressed, particularly in ASTM standards, as centipoise (cPs). For example, water at 20°C has a viscosity of 1.002 cPs. 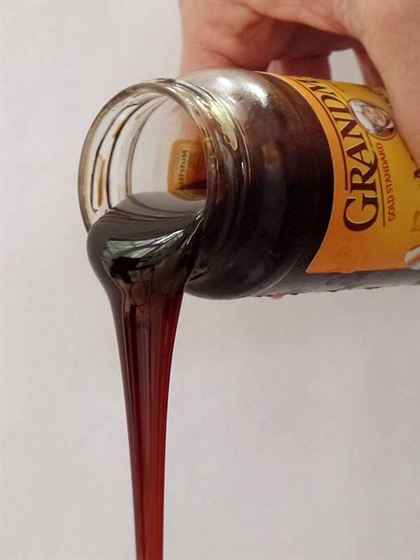 Cold molasses is a highly viscous liquid, as every grandmother knows.