Many of the MicroCare cleaning products are azeotropes, and that's important because it lowers your costs, boosts cleaning effectiveness and enhances worker safety — all very good things. So the next question is, how does an azeotrope do that? For that answer, we have to go back to Chemistry 101.

Now let’s consider the boiling point of these materials. The boiling point of HFC-43-10mee is about 50° C / 130° F. But if you mix HFC-43-10 with a small but precise amount of methanol the boiling temperature suddenly drops to 48° C / 118° F. This is very odd and unexpected. The two chemicals are still separate and distinct in the mixture, but when mixed together they jointly lower their combined boiling point. 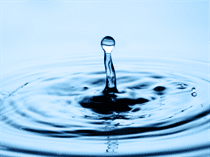 When we boil this mixture in a beaker the two constituents will boil off at the same rate. Let’s supposed the mixture we are testing is 97% HFC and 3% alcohol. If we measured the fumes coming off the boiling liquid, we would be pleased to notice that the mixture of fumes also was at the same 97:3 mixture. When we chill those fumes and condense the material back into a liquid state, it will have the same 97:3 mixture. In fact, no matter what we do the mixture it always stays at the 97:3 proportions. This means we have created an azeotrope. With azeotropes the ingredients never separate.

There is a bit of magic to making azeotropes. Not all liquids form azeotropes because the density, boiling point and surface tension all has to be exactly right.

Why Do I Care?

Azeotropes are cool. Azeotropic behavior allows engineers to deliver the benefits of a mixture with the convenient handling and storage of a single compound. There are three main benefits of azeotropes:

Sadly, not all azeotropes are created equal. To a finicky chemist, a perfect “true” azeotrope only exists at a single temperature and specific pressure where the azeotropic behavior is observed. But “close” can be good enough. Many products are successfully marketed today which are not “perfect azeotropes” but near-azeotropes. Near-azeotropes can be repeatedly evaporated, condensed, and recycled without changing the blend’s composition or other properties. Even though it is technically just a mixture of different chemicals and does not meet the exact technical description of an azeotrope, a near-azeotropic solvent behaves as if it were a single pure component solvent rather than a solvent mixture. These cleaners are so close to being azeotropes that they exhibit stable azeotropic behavior.

One popular example of a near-azeotropes is the General Purpose Flux Remover (#MCC-FRC) from MicroCare. This cleaner is not a perfect azeotrope in the strictest definition of the word, but offers azeotrope-like stability and can deliver the performance, safety and time-saving convenience of single-solvent operations under almost all conditions. They are so close to being true azeotropes they can be used in applications requiring azeotropic behavior, such as vapor degreasing.

Lastly, sometimes there is no single solvent or azeotrope which is sufficiently strong to get the job done. In this case, some customers switch to using a bi-solvent or a co-solvent system. These systems use two solvents — one aggressive cleaning solvent, and one milder rinsing — to remove the most difficult soils. The Tergo™ Chlorine-Free Cleaning Fluid (#M2S-TCFCF01EUP (Boil) and M2S-TCFCFRIEUP (Rinse)) is one such co-solvent product. For more details about co-solvents, contact MicroCare.