Many of the MicroCare cleaning fluids technically are called “azeotropes.” That’s important because azeotropic cleaning lowers your costs, boosts cleaning effectiveness and enhances worker safety. While azeotropes are difficult to make, these strong benefits make the effort worthwhile.

So the next question you’re going to ask is, what’s an azeotrope and how does an azeotrope do all those good things? For the answer, we have to go back to Chemistry 101.

First, an azeotrope is best described as “a constant boiling blend.” To be an azeotrope, the liquid has to be a mixture of at least two different elements or compounds. For example, “neat” HFC-43-10 and “neat” nPB are not azeotropes because there’s nothing else in it but one type of molecule. This is called a “monosolvent.”

Now, oil and vinegar are a mixture of two fluids, but they’re don’t make an azeotrope because the fluids separate from each other, almost instantly. Same with oil and water.

But Bromothane™ R is a mixture of nPB and isopropyl alcohol and it is an azeotrope. Same for MicroCare CMS, which is a mixture of two HFC fluids and a third chemical called “trans.” Lots of chemicals mixed together, but they behave as though they were one chemical. 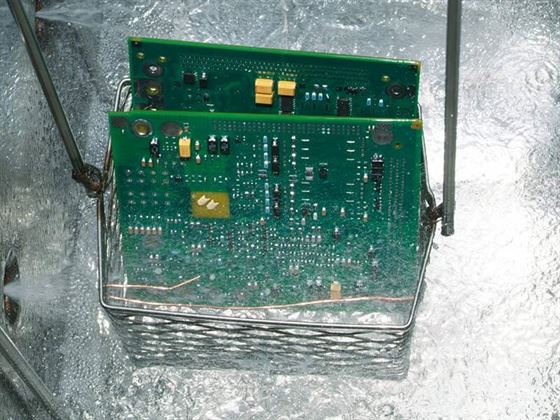 Consider the boiling point of these materials.

The boiling point of nPB is about 70° C/170° F. But mix nPB with a small but precise amount of alcohol and the boiling temperature suddenly drops. This is very odd and unexpected. The two chemicals are still separate and distinct in the mixture; there has been no chemical reaction in which they actually change their chemical state. But somehow the two chemicals are working together to lower their combined boiling point. Most importantly, when we boil this mixture the two constituents boil off at the same rate.

Let’s suppose the mixture we are testing is 97% nPB and 3% alcohol. If we measure the fumes coming off the boiling liquid, we would be pleased to notice that the mixture of the ingredients in the fumes also was at the same 97:3 mixture. When we chill those vapors and distill the material, it again will have the same 97:3 mixture. In fact, no matter what we do the mixture it always stays at the 97:3 proportions. This means we have created an azeotrope.

There is a bit of magic to making azeotropes. Not all liquids form azeotropes because the density, boiling point and surface tension all has to be exactly right.

Why Do I Care?

Azeotropes are way cool. Azeotropic behavior allows clever engineers to deliver the benefits of a mixture with the convenient handling and storage of a single compound. Perhaps one chemical is nonflammable but not a great cleaner. But mix it with a super cleaner that happens to be flammable and what happens? You get a great nonflammable cleaner. It’s like getting two different solvents out of one drum.

For example, azeotropes are very easy to distill and recover. If the solvent in a vapor degreaser acts as an azeotrope then the solvent can be boiled away and distilled while the contamination — fluxes, oils, water, belly-button lint and such — stay “trapped” in the liquid at the bottom of the machine. In effect, using azeotropic solvents allows us to trap and concentrate the contamination by distillation instead of using filters and membranes and such.

Another important benefit of an azeotrope is the unexpected ability to mix flammable and nonflammable ingredients to produce a stable nonflammable mixture. This is an amazing chemical phenomenon. Imagine mixing flammable products — like alcohol — into Bromothane™ R and yet still be retain the convenient and safe handling characteristics of a nonflammable chemical. This is a big boost for safety!

Lastly, azeotropes permit the “tweaking” of a blend to obtain unique physical properties which makes the blends useful across a broad range of applications. For example, HFC-43-10 is a very mild cleaner. But add some other ingredients in azeotropic proportions, and we can make it into a blend that is much stronger and more effective. This allows us to “tailor” a cleaning fluid for your exact contamination. The possibilities are almost limitless.

Only MicroCare has the broad range of ingredients and expertise to engineer money-saving azeotropes for your applications. Look for the term “azeotrope” in the product description and in the SDS sheet.